The choir of the sky

With the amount of rainfall in the last two days, it was exciting to see how the reserve was looking. 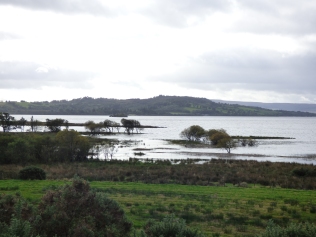 During the winter Loch Lomond NNR is known for being a wetland and becomes a home for many wildfowl and wading birds but today I noticed another bird making use of the wetlands……… a skylark.

Skylarks are found on most areas of open farmland and feed mostly on insects, cereal grain and weed seeds. This skylark was wading in the water, getting its feet wet. I suppose you could think that due to the high water level it was after seeds washed up along the edge of the flood water?

For being such a small bird, their lungs are more than capable of producing amazing song, earning them their a reputation of being one of the best songsters in the world. Their song is detailed, quite fast, very erratic and conveyed within a limited frequency range.

This skylark looked quite plump.   Back in the middle ages the skylark was regarded as a delicacy and eaten regularly. The life span of a skylark is only typically 2 years! I think its best we leave them to get on with life since they have such a short lifespan compared to other animals. 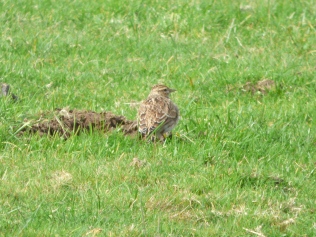