The fine weather has been perfect for continuing with the monitoring of our breeding birds down at the Loch Lomond reserve. The water level is very low which means that you can get round more of the reserve and I managed it on Monday without falling in any ditches or getting wet feet. Unusual in this wettest of swamps.
The reserve looked spectacular and the breeding bird survey gives a chance to savour the wildlife around in the early morning

Below: A roe deer was hanging around in one of the meadows.

Below: A grey heron soaked up the early sun.

Below: One of many sedge warblers belting out his song.

Below: A late dunlin in only partial breeding plumage was mooching around on the loch shore. They should be breeding in the uplands already, maybe this one had failed to find a mate or the nesting had failed or had just decided to miss a year? 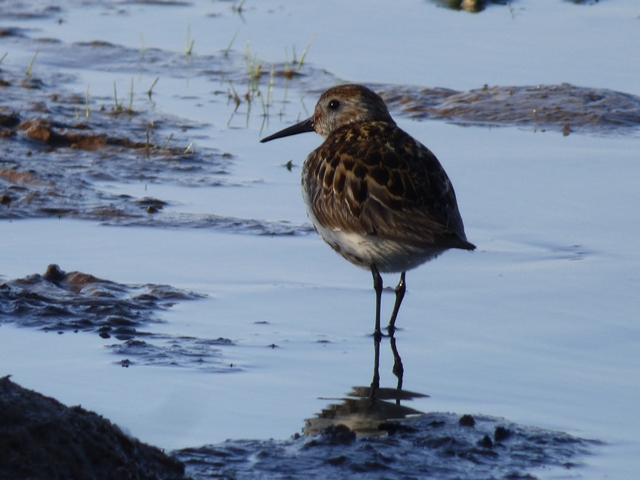 And there were a number of reed bunting pairs on territories around the site. You can usual find them by listening out for the male singing from the top of a bush like this one.

The Scots names for reed buntings usually refer to the males black hood, like “black bonnet”, “coaly hood” and in Renfrewshire the delightfully named “Colin Blackhead”!

I say singing in the broadest sense as I think they have one of the most miserable of bird songs. In the book it is described as “twenk, twenk, tititick” but this doesn’t really cover the full miserable sound produced. But as ever with nature there is more to it than meets the ear.

Apparently successful males sing differently to unsuccessful males. An unpaired male has a more rapid group of notes and sounds in phrases with gaps in between whereas a successfully paired male has a slow, steady almost continuous song. So I am not sure if this change in song is because the paired males just don’t have to try anymore or are just holding a territory rather than trying to attract a mate or are maybe just tired but seeing as in the reed bunting world it is quite possible for a male to have a number of mates across an area it might just be the later.

A more usual view of a female. Partially hidden in a tussock of rushes with a beak full of insects to feed her chicks.