It has been a fantastic summer with plenty of sun and little rain but worrying from a bog manager’s point of view.
Last week I did a round of the hydrological monitoring equipment to collect data on what the water levels have been doing within the body of peat.
An superficial look across the moss and things don’t look too bad; the vegetation is green and much of the sphagnum is damp.
But a closer look and there are signs that the effects of the dry spell are starting to bite.
Ditches aren’t holding the water they should, most pools are empty and cracked and the ground itself doesn’t wobble like it normally should.

The water level monitoring devices show the same story. These are very basic – just an old lemonade bottle with a bit of sand in it moving up and down in a drain pipe set in the peat. As the water table moves up the bottle moves up with it and in the drain pipe is a measuring tape and markers that allow the highest water level and the lowest to be recorded.
Normally at the edge of the moss, and where there has been a lot of damage, you expect the water table to go up and down a lot. Whereas in the centre of the peat domes you expect the water table to be much more stable. 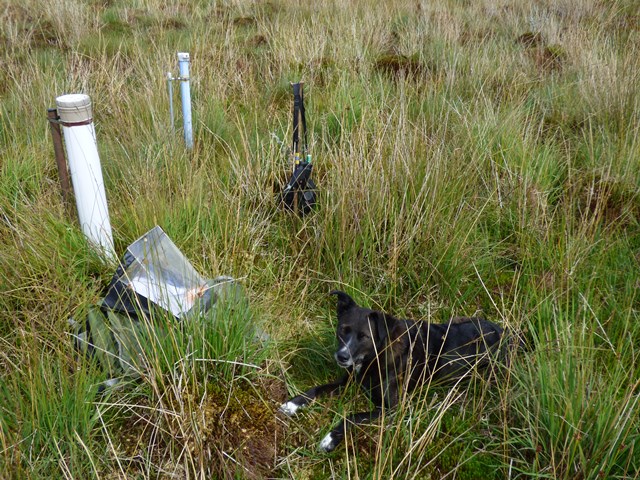 This water level monitoring device shows much less variation in water levels showing this area of bog is better at holding onto its water.

The readings this time however show that the water table has dropped a long way across the whole of the moss and there big differences between highest and lowest water levels and he devices show that the water table is now at least 20-30 cm below its normal level.
If this is maintained then we would start to lose the bog vegetation but the recent rains have started to fill up the moss so if this level of rainfall continues the damage won’t be permanent. Really, Flanders is like a giant reservoir covering 860ha, and a few showers won’t be enough to fill it up. We probably won’t see the water levels return to normal until we get heavy winter rains when it isn’t warm enough for much evaporation.
So with my bog manager’s hat on I would like to see a winter with plenty of days of continuous steady rainfall. Not something that will make me many friends.