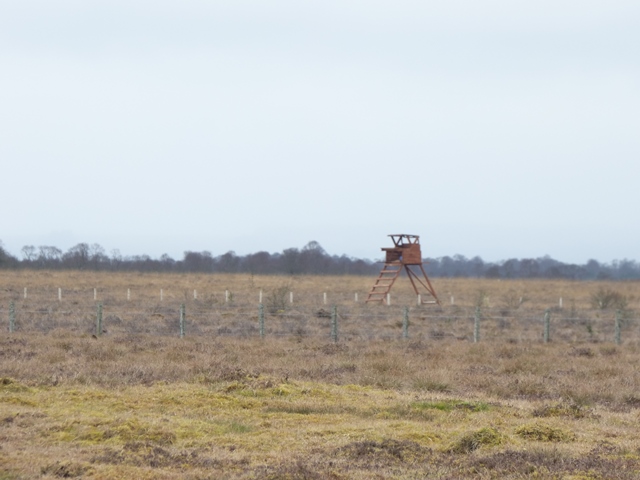 As you look out from the viewing tower you might be wondering why there seems to be  a numbers of structures appearing out on the moss. Some look a bit like something out of the Empire Strikes Back or maybe some space invaders. But they are high seats used for shooting deer. As mentioned before, the red deer population on the entire Carse of Stirling  is quite high at the moment. The deer have moved onto the moss and found it ideal country for them. They lie up on the moss, undisturbed,  during the day and then under the cover of dark march across the moss onto the farmers’ fields and eat their crops. We aren’t talking about 1 or 2 deer but groups of up to 120 and they are big animals so can cause serious damage to crops. And all those hooves marching across the delicate moss is destroying the fragile bog vegetation.

The nibble spruce shows the numbers of hungry deer on the moss.

So the numbers need to be reduced. On such a flat site it is difficult to get a safe shoot with an effective back stop so the deer stalkers need to get a high position to shoot from, so that any shot goes towards the ground. Hence these high seats. They are lightweight so they can be moved around to be in the right place to be close to the moving deer. So the ones you can see from the tower will probably get moved at some point and removed entirely if the deer population is reduced to a level that enables the bog to regenerate and the damage to farmers’ crops drops to an acceptable level. And for those interested, any deer that are shot go onto game dealers and then onto butchers to be consumed by people. In the next month or so we will be doing a night time count to get an idea of whether the population is starting to go down and we will keep you posted with the results.